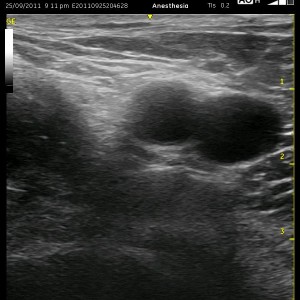 The femoral nerve is seen to the left of the femoral artery and vein as a hyperechoic (white) triangle in the ultrasound image to the left. This is often one of the first nerve block to master with ultrasound because it is a relatively simple and superficial option and also probably because Total Knee Arthroplasties are such common and such painful procedures. The sonoanatomy is relatively straight-forward, however, as I will point out, there are a number of nuances to this procedure that should be kept in mind in order to avoid some minor and some serious errors.

In the cadaver image below, the femoral nerve is seen proximally as a solid and flat structure that fans out significantly as it travels distally. Note the sartorius muscle laterally. You will be looking for this landmark during this nerve block. It is difficult to appreciate the fascia iliaca which thinly covers the femoral nerve and the iliopsoas muscle. I have made the comment that recognizing this structure on ultrasound is more important to performing this nerve block than identifying the nerve, and I will elaborate further on this later. Utilizing an entry as lateral as the sartorius muscle (and often through it), I view the needle with ultrasound passing in a relatively flat plane to the transducer. Be sure to identify the femoral nerve as proximally as possible, and then to find a good entry point in the skin, slide your probe laterally instead of along the inguinal crease. This is an easy mistake to make, and I will discuss later why this is important. Determine the appropriate trajectory toward your target, and follow your needle as you move it medially. Before reaching the femoral nerve, 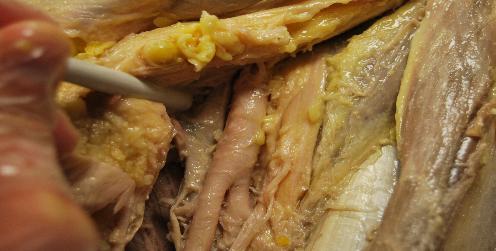