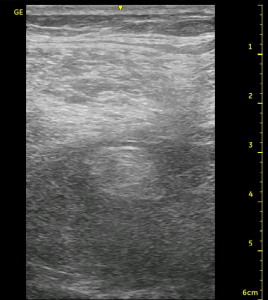 I consider this block to be one of the basic blocks that should be learned early in the course of converting to ultrasound and continuous nerve blocks. Of the sciatic nerve blocks, it is the easiest to incorporate ultrasound (no matter your original approach or patient positioning), it is a superficial block which allows for a perpendicular needle approach and there are several ‘guideposts’ to clearly identify the nerve.

Some of the points I make here will likely be repeated on the YouTube links below, but hopefully it will be a case where the repetition is a positive thing and not a bore. This block can be performed with ultrasound successfully in the supine (with the calf elevated), prone and lateral position. I am going to describe my preferred position which is lateral with the operative leg rolling over so that the patient’s knee is pressing on the bed. I think it is easiest to learn in this position for several reasons. One is fatigue. It is often necessary to press hard to visualize the structures for this block, especially with more obese patients. Hand fatigue can be a real factor, and I find that I can more easily generate a great deal more force when I press down than you can if you try to push upward (using your weight or triceps rather than your anterior deltoids) especially for extended periods of time. Being able to press the leg into the bed (or into my thigh in the case of a more lateral position) instead of into the air (when supine and calf elevated) to makes it much easier to get the compression necessary for good visualization. Remember that you are also applying pressure on a slick gel covered surface which makes holding steady your probe hand more difficult when pressing upward into the back of the leg. Also, with the lateral or ‘nearly prone’ position, the probe is oriented the same as the ultrasound screen (though some screens allow for rotating the screen 180 degrees to match your orientation) with the probe on the top of the patient. Lastly, it helps to look down at the back of the thigh as you visualize the structures that are beneath the skin and their orientation to one another. It allows as well the ability to recognize landmarks when asking the patient to flex at the knee to help you orient (or reorient) yourself properly. Building these 3-D visualizations in your mind is a key tool to adapting to ultrasound (and it is also very helpful with nerve stimulation as well). Practically, moving a patient into a completely prone position is physically difficult to do especially when they are in pain, and it can make sedation and monitoring more difficult.

Despite the comments above, the most ‘simple’ position is to just elevate the calf of a supine patient, and this may be a more gentle approach for the patient who is already in pain.  You need a reliable and readily available system for elevating the leg. I have used an expensive leg holder that our Podiatrist uses in the O.R., and I have seen variations with the use of a Mayo stand and pillows or wads of those blue or green O.R. towels taped together. Being able to ‘wedge’ the probe between the bottom of the leg and the bed is helpful to conserve hand strength in this position. With a supine position, it allows some to use a ‘one hand sterile’ approach for continuous blocks where the probe hand is not sterile, but under the leg and away from the sterile block site. You will have to deal with the ‘up is down’ problem regarding the ultrasound screen orientation in this position which can be a challenge for the beginner.  Once the leg is lowered, however, you are already in the correct position and have the easiest orientation to do a femoral or saphenous block. I only use the supine position when adding a quick single injection sciatic block (for example, for a total knee after the continuous femoral block), for a patient in extreme pain before surgery from a trauma or for a Rescue Block in the PACU if the patient’s body habitus is not excessive. In most other circumstances, a little fentanyl and gentle movement is enough to optimize positioning which routinely facilitates block placement.

If I am going to spend a few minutes doing a continuous nerve block, I find that it is worth it to take the few extra minutes to optimize positioning (and other ergonomics) so that the procedure itself is reliably quick and effortless.  I have become accustomed to using a variation of the lateral positioning of the patient. As described above, I have the patient turn (carefully if they are in pain, of course) with the surgical side up, then allow the knee of the upper leg to fall forward onto the bed. I stand on the side that the patient is facing. With the bed high enough and the ultrasound machine directly across from me, this is ergonomically a very comfortable position for me to do the nerve block. It is also very easy to recognize surface anatomy which I use to my advantage.

Many people begin scanning at the popliteal crease where the vessels are apparent as markers for the nerve, then they scan proximally. My approach is just the opposite. I identify the Biceps Femoris tendon and follow it proximally until it becomes a muscle, then I initially place my probe on the patient such that the lateral aspect will be over that muscle. I am now consistently oriented appropriately and can begin scanning for the sciatic nerve which should be just below the medial aspect of the Biceps Femoris and the lateral aspect of the Semimembranous/Semitendonous muscles. It is commonly about 3 cm deep and is best seen by aiming the probe slightly towards the feet. This is because as the nerve travels distally, it emerges from beneath these muscles to a more superficial position, and you will more likely cut through it at a 90 degree angle (remember anisotropy?) by adjusting your probe accordingly. This angle is more acute in particularly muscular patients.

Whatever the actual depth of the nerve, I try to select a needle path that will avoid muscle trauma to the Vastus Lateralis and Biceps Femoris. I will contact the nerve at the most shallow or deepest aspect if I am aiming more proximally where the Tibial and Common Peroneal appear as one single structure. Trying to penetrate the paraneurium, I extend the needle toward the medial side of the nerve and look for circumferential spread of the local anesthetic, then ultimately leave the catheter on the medial side of the anterior surface of the nerve to have ‘track back’ work for me. This also orients the catheter with multiple orifices against the nerve. The other option is to move distally where the musculature falls away to the sides (making the target more superficial) and the two nerves begin to separate. In this case, I press the needle between the nerves and pop into the paraneurium and inject here. The paraneurium will separate completely, and the nerves may split apart too far for one catheter to cover both of them if your target is chosen too far distally.  I look at it with a catheter technique like I would if I were watering flowers. I only have one water hose, so I leave it where the flowers are close together so they all get water. Unless you confirm that you are within the paraneurium, where the nerves are contained within this structure, the slow trickle flow may not reach all of the flowers (Consider the last cadaver image below with the catheter at the level of the white probe versus being several centimeters distally where the nerve has split and has moved apart some distance).  Also, be aware that the advantage of the proximal approach is that the popliteal vessels are not immediately adjacent, and you may be less likely to accidentally hit them if you lose your needle tip. See the cadaver pictures below for more detail.

I would now like to focus on some additional anatomical points with this nerve block. I think of the Biceps Femoris and the Semimembranous/Semitendinous muscle as each of two sides of the roof of a house covering the sciatic nerve which sits just below. They represent the second of three ‘layers’ (1-skin/fat, 2-muscles, 3-nerve/vessels) that you should consider as you initially scan for the nerve. See the cadaver pictures below for illustrations of this concept. 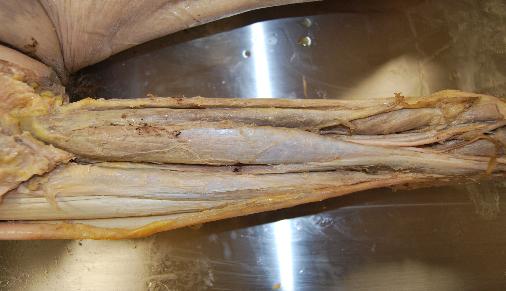 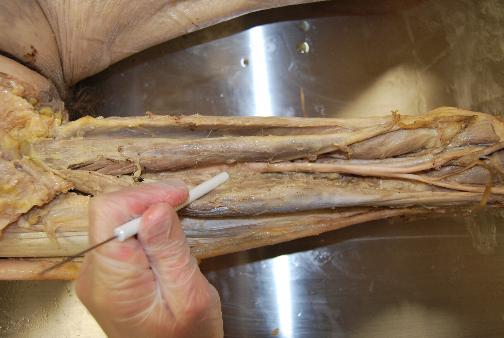 Notice below the orientation of the Common Peroneal and Tibial Nerves below. The Tibial Nerve continues in a relatively straight path just superficial to the Popliteal vessels while the Common Peroneal Nerve takes a slightly lateral (downward in the picture below) course. What that means is that it makes sense that when using nerve stimulation only, we often first encounter dorsiflexion and eversion (Common Peroneal response) then if we keep advancing, we switch to plantar flexion (Tibial response). If these responses change with millimeters of needle adjustment, then the individual nerves are still one unit or very closely approximated. If there is some distance between responses with no response inbetween, then the nerves have separated at this point. Without ultrasound, we would have to guess whether or not we are ‘close enough’ to inject our local. It also will tend to lead to the use of greater volumes ‘just in case’ we don’t get the desired path of spread.

Utilizing ultrasound, we are able select the point at which the nerves are as separated as we want them to be. As mentioned above, some choose to inject at a point just where the two nerves are moving apart because there is more surface area (leading to a quicker block set up) and to make it easier to ‘pop’ into the outer connective tissue paraneurium without impaling the nerve. There are some technical skills to learn with needle dexterity and control of the probe before one starts to manipulate the nerve to this degree. Sometimes the anatomy works out perfectly, but given an ‘either or’ scenario, I instruct physicians initially to select a position a little more proximal where the nerve is essentially one unit (to stay away from the vessels) and just confirm a circumferential spread of local.  With both approaches, I try to take time to safely penetrate the paraneurium to get the best results. I have found it to usually allow me to make just a single needle pass for the procedure, and it is a further comfort that I will be successful as I walk away from doing the block, but this requires some insight and dexterity to perform safely. In any event, you will need to become proficient at redirecting your needle for optimal spread because a single pass is not always possible. 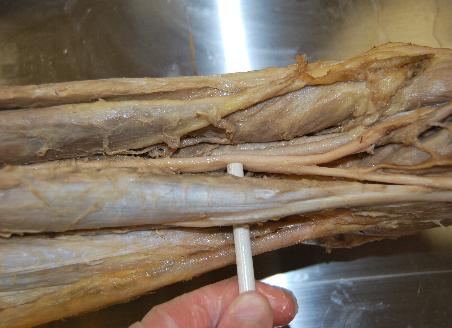 Follow the links below to see an ultrasound video of the sciatic nerve at the popliteal fossa which scans from high to low and repeats as well as a short video from some of my Powerpoint lectures describing helpful points for identifying the nerve in this region.