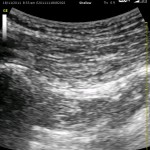 The subgluteal approach is where I first started blocking the sciatic nerve for total knee arthroplasty (TKA). Since I usually performed the subgluteal sciatic nerve block as a single injection (and some of the extra steps for a continuous block could be omitted) after the continuous femoral block was already secured in place, it wasn’t a big deal for me to turn the patient on their side to do this approach, and it usually was a straight forward view on ultrasound.  If you want to use the subgluteal approach for your TKA’s, you may find it more convenient to position the patient laterally, perform the block, then roll them back into the supine position for the continuous femoral block. Ultimately, I switched to the Anterior approach for the convenience of not having to reposition a somewhat sedated patient into the lateral position, and I owe my conversion to the Anterior approach to the continual pressure put on me by my Anesthesia Tech assistant, Dave Sundy, but I will discuss more about that in the Anterior Approach section.

The cadaver pictures below display the orientation of the surrounding structures. Cranial is to the right in both images. With the Gluteus Maximus (GM) reflected from the origin, the sciatic nerve can be seen extending laterally somewhat as it descends and lays across the Quadratus Femoris (QF) muscle deep to it. The Ischial Tuberosity (IT) is to the left, and the Greater Trochanter (GT) is to the right. Consider the sonoanatomy with this image in mind. You should think of identifying superficially, the skin and subcutaneous tissue followed by one thick muscle and another muscle deep to it with the nerve sandwiched between these muscles. You should be looking for the change from one muscle belly to the next, then tilting the curved probe once you identify it to allow the sciatic nerve to be discovered at the right angle. Consider, as well, the pattern of spread the local should have as you inject. It should travel left and right in somewhat of a linear pattern. When you do not look to identify this plane between these two muscles adequately, you are likely to believe that the plane deep to the QF is your actual target as it tends to be easier to visualize. I will go over this again later, but let this image help to organize your thoughts of the sonoanatomy. 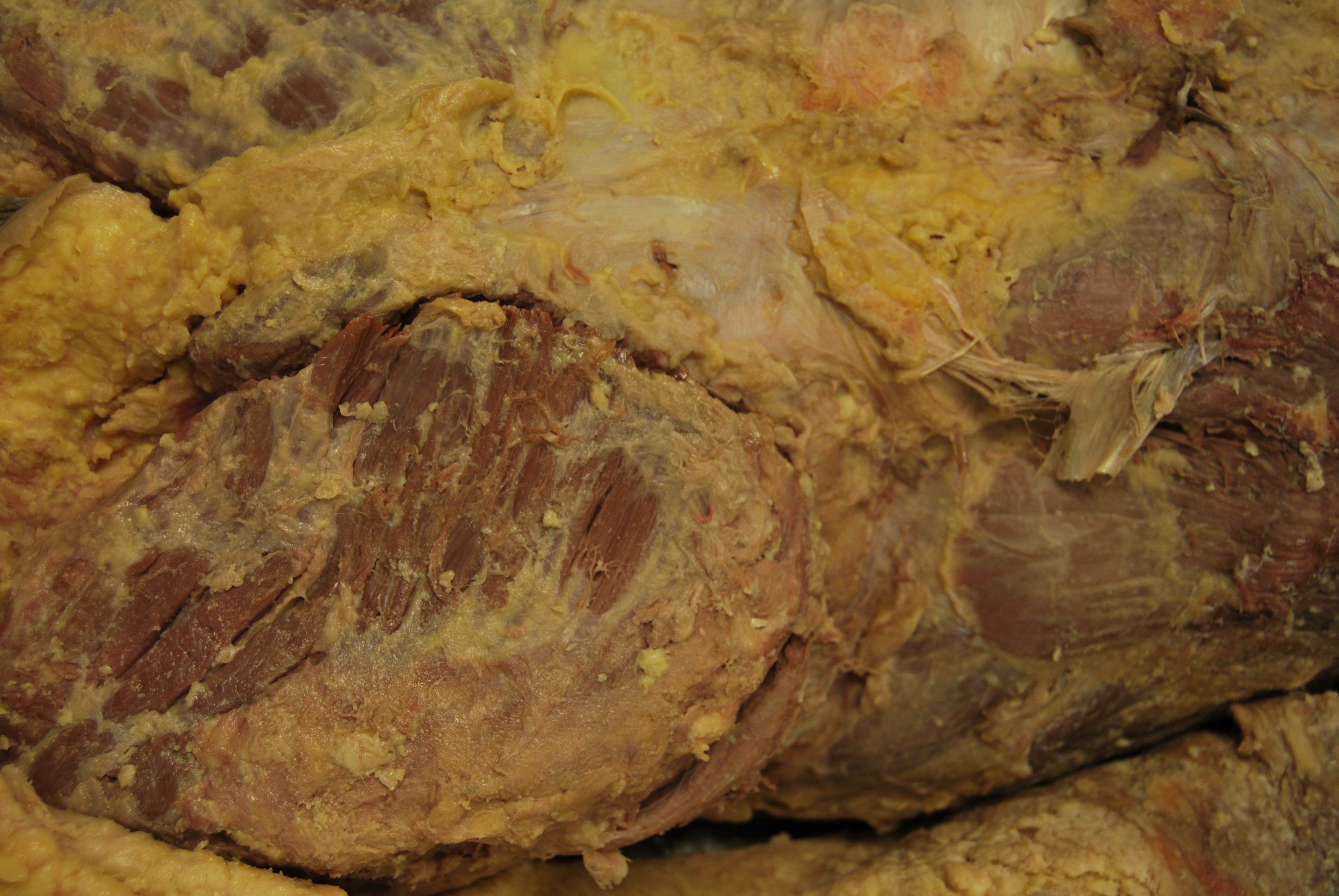 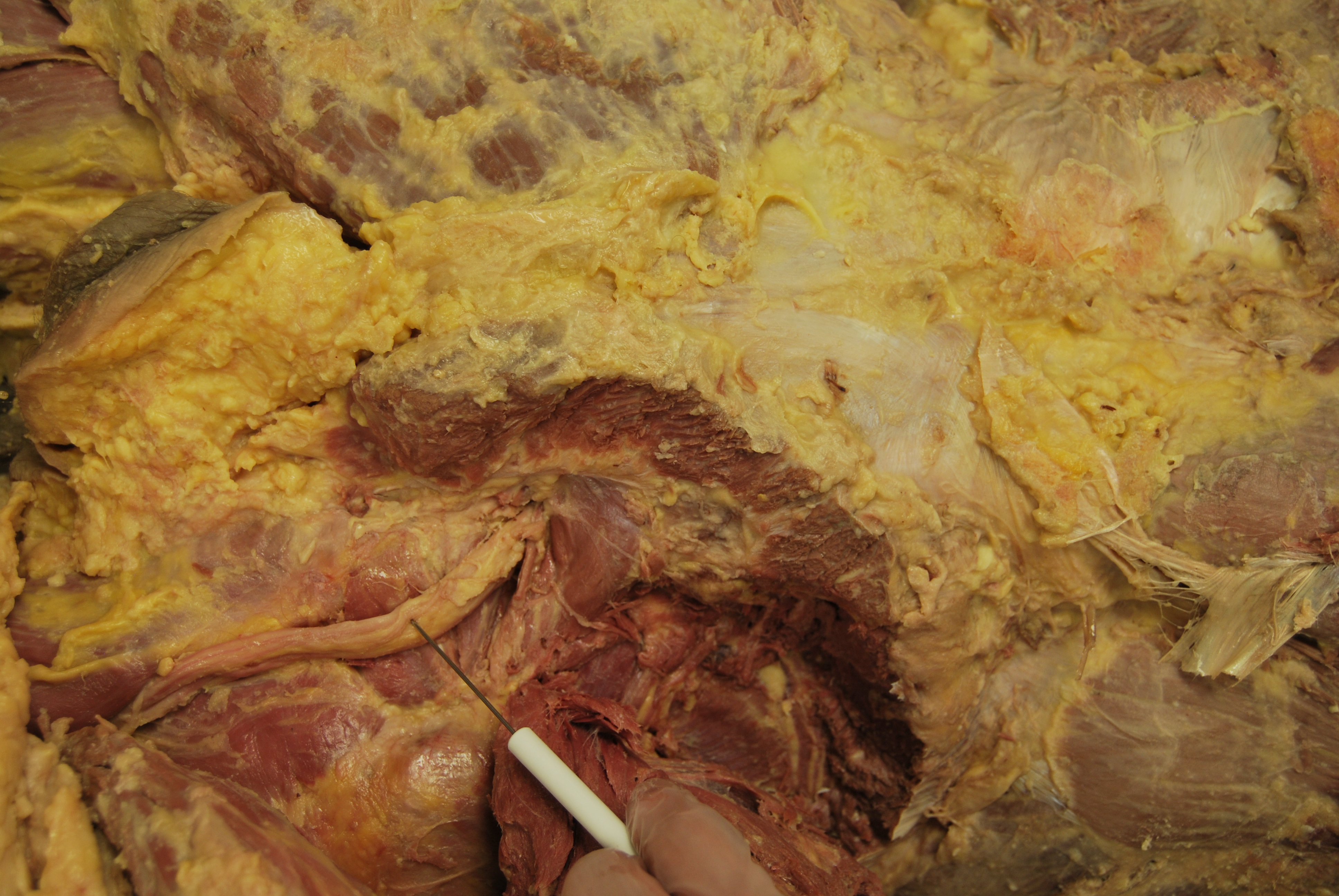 Although I did not have the insight to do this at the time I started doing this nerve block many years ago with nerve stimulation alone, I believe this particular nerve block does lend itself well to the step-wise incorporation of ultrasound into your practice. If you currently use a nerve stimulation technique, scan your patient after you have performed the block as you usually do. In fact, consider scanning before you perform your nerve stimulation technique as well. See if you happen upon the sciatic nerve and are able to use this information to find it easier with your nerve stimulation technique. You should be able to adapt your approach to allow you to add the ultrasound probe to what you are already doing since it does not require you to enter the skin from a different position as many other blocks do. Now let’s talk about how to do this block with ultrasound!

The view with a curvilinear probe is relatively simple. That is, if you are angling the beam at or above the base of the IT, there are very few things to try to recognize (a simple Archetypal view). Confirmation by observing local spread is straight-forward as well. If your probe is angled down toward the hamstring muscle origins on the IT instead of directly perpendicular to the patient’s skin, you will begin to get a  more complex view. This is more critical in the Anterior Approach and will be discussed in greater detail in that section. Consider the Archetypal view and additional cartoon drawing below: 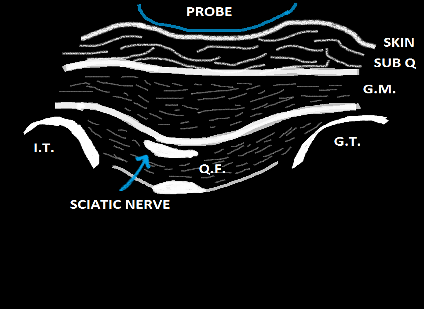 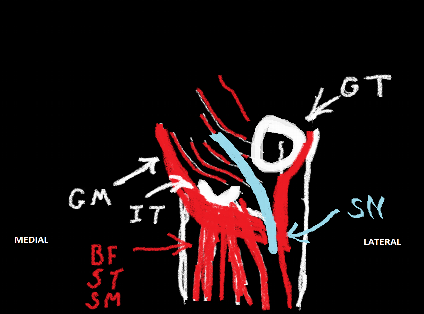 The probe will sit easily between the IT medially and the Greater Trochanter (GT) laterally, and the probe can ‘rock’ between these two points. First, identify these two structures at either side of your view. There will be…