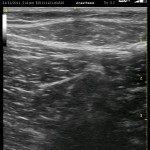 This is an often overlooked nerve block for ankle and foot procedures. This furthest extension of the femoral nerve has no motor component. It serves sensory innervation to the medial aspect of the calf including the ankle and some degree of the medial aspect of the forefoot. It also has a small contribution to the ankle joint. It is seen by some as an ‘add-on’ to a popliteal sciatic nerve block because it serves such a small area (and all superficial) that it may not seem worth doing. Maybe because of the failure rate associated with performing this block below the knee contributes to this view as well. Once the fibers reach the knee, they spread out in a wide fan-like distribution, and often some portion of it will likely evade our attempt at blockade (leading to a ‘partial’ failure anyway). Even when we block it here completely, local anesthetic is taken up at a higher rate (than if it were placed within a fascial plane), so the duration of analgesia is limited. Without ultrasound, we are left to perform this block blindly as a subcutaneous ‘half-ring’ block at the upper aspect of the medial calf, I have found this block is simple and quick (even with a catheter) when ultrasound is utilized, and it an integral component to foot and ankle procedures.

When I was first learning how to do continuous blocks, I didn’t know how to do a continuous saphenous nerve block. I had to do a continuous femoral block to cover the saphenous nerve (in conjunction with a continuous popliteal block) for an inpatient that had a huge nail put through his calcaneus into his tibia. Though it was worth losing quadriceps strength to get the necessary analgesia, it made ambulation quite an ordeal. Despite being so limited, the patient was still extremely grateful because he had the same procedure on the other leg previously and knew what he was missing (in terms of pain and opioid side-effects). Before the subsartorial technique was really talked about much and I was still new to ultrasound, I used a ‘soaker catheter’ below the knee a few times with success.

Today, I perform the subsartorial approach about a full hand breadth above the knee with the patient lying supine and the leg externally rotated. The sartorius extends from a lateral to medial direction and cuts across the vastus medialis (VM) distally. The VM is identified as the tear-shaped muscle medial to the knee. Even with obese patients, I try to feel for it or at least imagine its position with the sartorius running medial and posterior to it. I generally place the probe over the VM in a transverse orientation and direct it medially.

As the archetypal view below demonstrates, the muscle belly of the VM is seen completely covering the femur beneath. As you move medially, you are looking for the next ovoid structure that you encounter. That will be the Sartorius Muscle. Beneath it should be a pulsing artery, though it may not be directly under the center of the muscle. The artery will reside within a plane in or below the Adductor Canal. The muscles that you see would deep to the Sartorius are the Adductors. The left of the picture is medial. 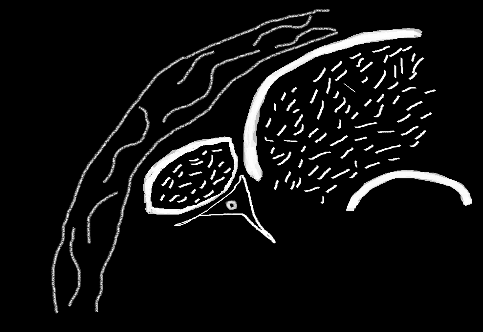 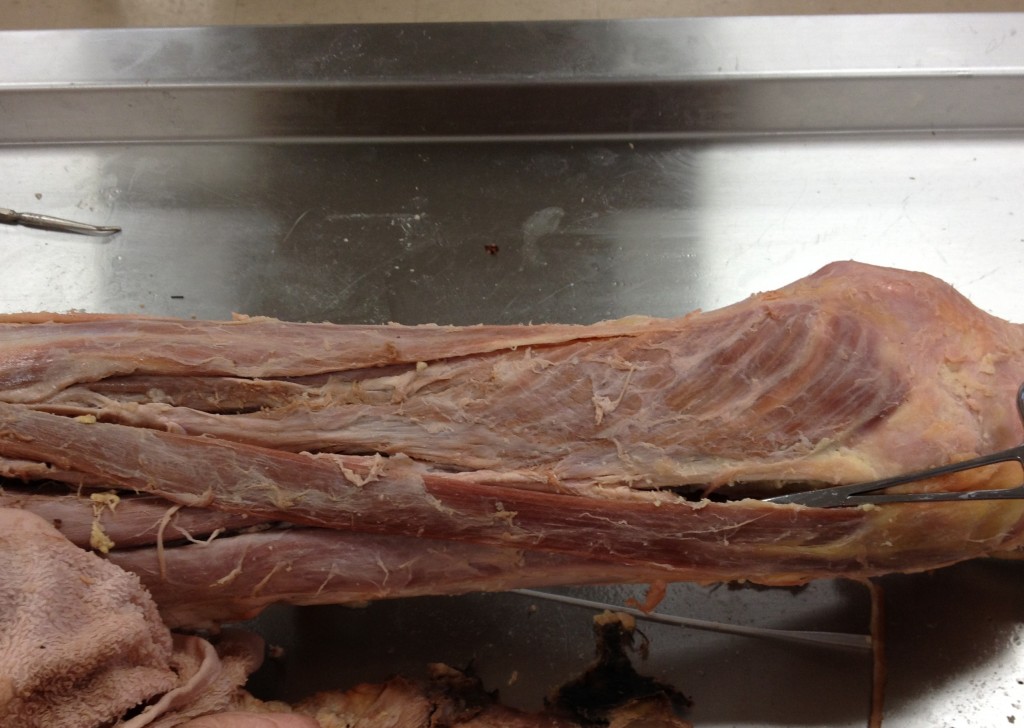 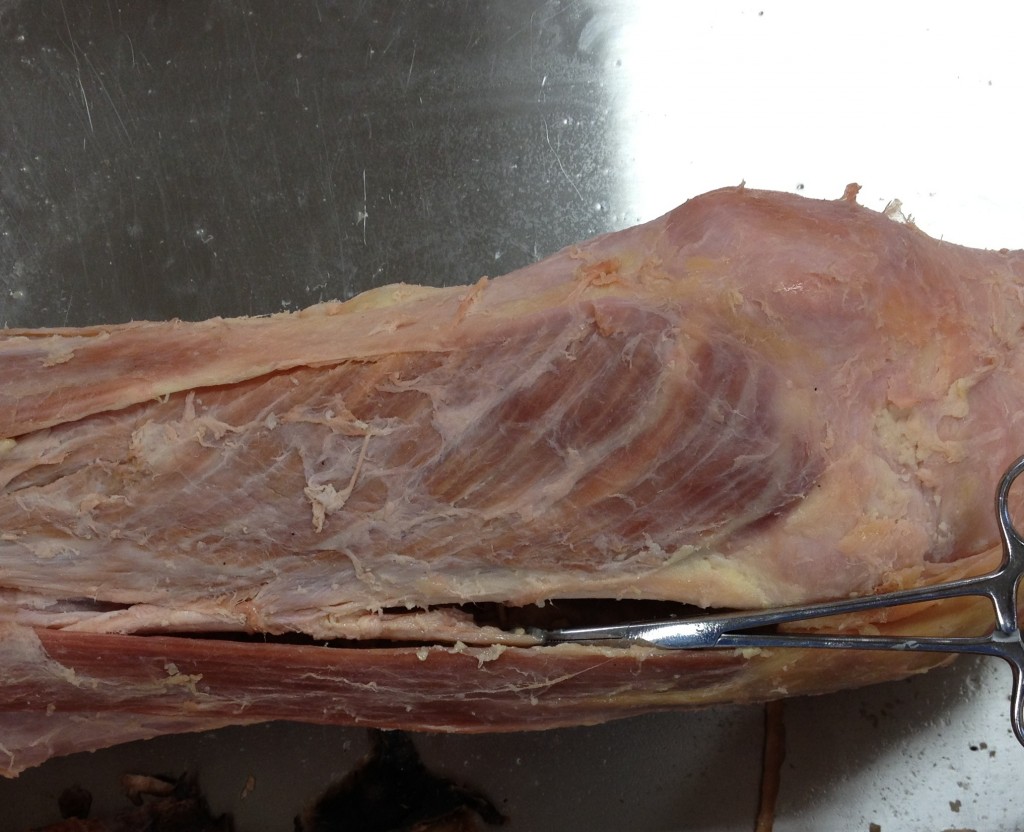 The Saphenous Nerve is not easily visualized underneath the sartorius muscle, but the Femoral Artery or  the Descending Geniculate Artery (if you find it this distally) should be identified. Sliding the probe proximally and distally, you will see the Femoral artery diving deep to become the Popliteal Artery, leaving behind a smaller Descending Geniculate Artery. The roof of the Adductor Canal can be seen at times as a thickened fascial plane. Fortunately, you do not need to identify the nerve; just get your needle adjacent to the artery and inject. The nerve will become apparent at this point.

It is easier ergonomically to enter with the needle …