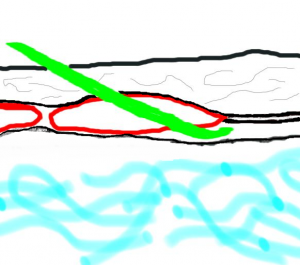 Once I have passed through the rectus muscle with a six inch Tuohy needle, I will have my assistant inject a few mls of local anesthetic to hydrodissect, then I will advance my needle under ultrasound guidance, and we just continue this pattern until I have gone as far as the needle will take me. Once you have gone as far as you are able, just thread the catheter to the end of the needle and withdraw the needle. Some will use saline during this process in order to avoid using too much local anesthetic, then they will bolus afterward with local. I don’t find the need for this, and it adds more time to doing the block (and likely increases the time of onset as well). I use concentrations between 0.2% ropivicaine or 0.375% bupivicaine (with or without 1:400,000 epi) depending whether I am adding bilateral TAPS (or doing only one subcostal TAP like if there is a colostomy in the way, for example), and I make sure my assistant is aware of the volume to be injected so I don’t accidentally run out of local too soon. I ask them to alert me at 1/4, 1/2, and 3/4 of the volume just in case. When I get done, I have them inject the rest through the needle before I insert the catheter. It may create a better distribution of local along the catheter due to ‘track back’ to inject any remaining volume through the catheter, but that adds valuable time to the procedure (That is, it is easier and faster to inject through a large bore Tuohy than a catheter, and, remember, you have to do the same on the other side. Also, the higher bolus pressure through the needle may extend the pocket of local further which may increase the area covered by the block in the end. I have seen bubbles of air at the iliac crest after doing the subcostal TAP as I’ve prepared to do the TAP on the same side, so I don’t add the TAP unless the incision significantly beyond the navel.

There are a few issues to keep in mind with this block. The first is about the timing of catheter placement. Commonly, this block is performed post-operatively in the O.R. while the patient is still under a general anesthetic. It is much harder (if not impossible) to do this after their dressings have been placed, so make sure you have everything ready to go and that you are adequately warned about the time of closing. If the plan is to place the block at the end of the case (in the O.R. or in the PACU), the opioid management has to be discussed. If it is estimated that the patient has received enough long-acting opioid to cover their post-operative pain, then bolusing the catheters may need to be done at a later time or just plan to only initiate an infusion. The other strategy (this is what we do) would be to use short-acting opioids intraoperatively, and bolus the catheters when they are placed at the end of surgery. If the patient is still expected to go to the intensive care unit intubated, then the issue is not as pressing (Hopefully, this block will decrease the number of patients that do stay intubated!). I like the anesthetist to ‘get the patient breathing’ at the end of the case to ‘see where we are starting’ and plan the post-operative course accordingly. Once they have done this, I have them ‘over-breath’ the patient with the ventilator. It is an enormous challenge to try to advance the needle between breaths with the obliques flexing. It is like suddenly doing the block in the open ocean when they are breathing on their own. This literally tripled the time it used to take me to do this block!

Another issue is whether or not bilateral TAP blocks (single or continuous) are going to be utilized. There is evidence that supplementing for the caudal aspect of the incision may not be necessary. Certainly, the worst pain will come from the cranial aspect of the incision, so this would be the most important aspect to cover if one had to choose between the two blocks. I have commonly used the strategy of two continuous subcostal TAP blocks along with two single injection TAP blocks for an exploratory laparotomy. I had started out using four catheters, placing the TAP catheters ahead of time whenever possible. I would hook the subcostals to infusions, and bolus intermittently the TAPs if at all. This, I found to be too cumbersome unless the incision extends to the pubis. Now, the common ‘4 block scenario’ occurs when a low incision for a sigmoid colectomy gets extended significantly above the navel for some reason. (If it only extends to just above the navel, I do continuous TAP blocks ‘relatively high’ but being sure to keep my catheter adjacent to the II/IH nerves).

I have recently switched to…