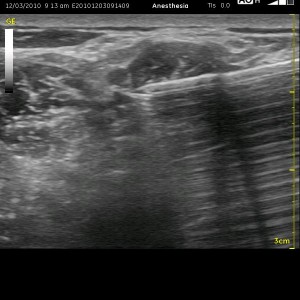 Converting from nerve stimulation to ultrasound for an interscalene nerve block classically involves going to a more posterior approach. This is also the case when changing from the traditional single injection to a continuous nerve block. For reasonable catheter securement issues as well as optimizing visualization with ultrasound, it becomes necessary to enter the skin several centimeters away, sometimes as far away as the trapezius muscle for catheter placement. The image to the left demonstrates a reasonable approach to the brachial plexus with the needle sitting just behind the 5th and 6th anterior cervical nerve roots (with a reverberation effect). The needle has passed through the middle scalene muscle (seen just above the needle). The anterior scalene muscle is seen to the left of the round nerve roots. A slip of the sternocleidomastoid muscle is seen as a relatively thin dark patch in the upper left-hand corner. If you plan to push the needle through the middle scalene muscle, I would advise a slow and steady pace as the dorsal scapular nerve may traverse through the muscle belly as well, and it can become entrapped by your needle to cause a (likely short-lived) neuropathy. The slower pace allows the nerve a better opportunity to be pushed out of the way and for your nerve stimulator to detect it as you approach. It can be seen as a short, white line that is thin and crooked. When I recognize it, I choose a needle trajectory that will avoid it.

Note that the brachial plexus does not appear straight up and down; the plexus actually leans backward against the middle scalene muscle exposing its anterior surface to the more superficial approach of a traditional single injection nerve stimulation technique (where you place the needle between your fingers which are opposing the anterior and middle scalene muscles). Just as in the spinal cord, the nerve fibers on the anterior surface of the roots at this level are motor fibers, so some twitch will be anticipated almost all the time. As well, the posterior fibers are sensory at this level. This orderly, separated orientation of nerve fibers is quickly lost as you move distally beyond the roots, but when approaching from the posterior position, it is far more likely to elicit a paresthesia and no motor twitch at all. The patient should be told to indicate to you when a sensation going toward the deltiod and biceps muscles occurs as you approach the C5 and C6 nerve roots. This also makes it more important to keep from significantly sedating a patient, expecting a twitch to indicate proper needle placement. It is typical that almost immediately after performing the nerve block from this approach, the patient is unable to flex their deltoids (I ask them to reach their hand up toward the ceiling before and after the block). Because of this nerve fiber arrangement, however, it is not uncommon for a patient to be able to move his or her hand though they have no pain in the shoulder and upper arm. This is an important point when evaluating post-operative pain in the PACU. Just because someone can move their hand does not mean the block was not well-placed. Start your evaluation by determining if the patient can recognize numbness or tingling in their index and middle finger only.

When approaching from the previously stated posterior position, it is far more likely to

Below is a video from our YouTube channel starting at a supraclavicular view going up to an interscalene view and repeating. Let your eyes follow the neural elements back and forth until you can recognize the pattern that occurs between these two areas. After that, focus on the other pattern changes and cues like the appearance of the scalene muscles and the movement of the subclavian artery. Starting from the supraclavicular position and sliding up to the interscalene position is a common technique used to clearly identify the nerve roots for this block.