The following is my response as posted on PRACTICE OF REGIONAL ANESTHESIA on LinkedIn to:

At first glance, this editorial and article were very concerning to me. As a profession, we do not have long-term follow-up with our patients which may obscure our view of the safety of our practices. Couple that with the fact that many patients who have an acute hemi-diaphragmatic palsy do not know it. It is possible that we are causing subtle changes in many of our patients (even with the blocks that were meticulously and masterfully performed), and we are not aware of it until a shocking case series like this uncovers this problem.

This editorial should certainly make us consider again the specifics of our technique and general practice patterns. When I review what was presented of clinical scenarios and consider my own recollection of changes that I have seen in the practice of regional anesthesia, there are a few things that keep me from abandoning these techniques that I believe to be of tremendous value to my patients.

First, we have no idea if the patients had their blocks placed by experts or relative novices. The use of catheters or ultrasound on some of the patients do not make me think that they were more likely to be placed by someone on either end of the spectrum. Second, these patients were overweight or obese males. The likelihood that there was some difficulty in needle and/or catheter placement is relatively high. Multiple needle passes at steeper angles with less than optimal visualization may be significant factors. I would certainly be more concerned if we had accompanying procedure notes that indicated that each nerve block was placed on the first pass with no difficulty whatsoever. I would be equally relieved about the gravity of this case study if accompanying procedure notes indicated difficulty visualizing structures, multiple attempts, blood in the needle, etc. Further, we do not know the approaches (anterior or posterior) that were utilized. I say this because a posterior approach in my experience should be much less likely to come near the phrenic nerve and vessels near it which should minimize any inflammatory effect in that vicinity. As well, ultrasound use does not, in itself, tell me that these were posterior approaches.

I find it somewhat reassuring that these lesions occurred with single injections as well as continuous infusions such that the extended bathing in local anesthetic is not held up as a ‘front and central’ theme in the editorial (this also leads me back toward the ‘difficult placement’ theory). I also find it it interesting that there were 3 times when ‘no guidance’ was utilized (paresthesia, I suspect) and that none of the blocks were performed with dual guidance.

When I consider the significant changes in my own technique that have occurred over several years (as well as what I have seen training others) and the fact that there are so many people that are still ‘converting’ to ultrasound and/or catheters, I am almost surprised that there are not more horror stories out there. I will certainly continue to watch for future case reports and consider this unlikely event in patients that I see, but I don’t have enough evidence as of yet to change my practice or to think I am unknowingly harming patients. 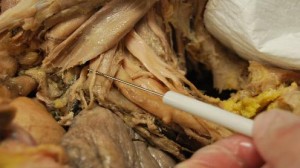